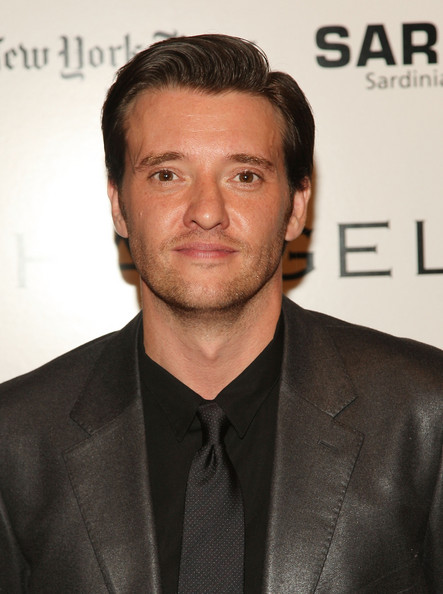 There are many gifted actors in Hollywood, but there are only a few who have that extra ‘je ne sais quoi’. Jason Butler Harner definitely belongs in that category. The 43 year-old American currently stars in the action movie Non-Stop and has recurring roles in the popular television series The Blacklist and Homeland. Despite his international succes in theatre productions, movies and TV shows, he remains down to earth and keeps the emphasis on what he thinks is important: telling great stories.

“When I was young, I only thought about telling great stories and playing really complicated characters. I never fantasized about walking down the red carpet or making a lot of money, that just wasn’t it,” Jason recalls. “To me it’s about telling good stories and making people think, laugh or feel something. The older I get, the more I’m reminded of that. Yes, I would like to have a financially stable life as much as possible, but I also realize more and more that I just want to do good work, and have fun while I’m doing it. If I feel like the work isn’t going be fun, and by fun I mean anything ranging from a laugh to just really good hard work, then I’m less interested in doing it.”

For many years the actor has been busy with theatre plays and making movies, but does he prefer one over the other? “I love both theatre and movies so much, I wouldn’t want to choose between one of them,” Jason responds. “You get different things out of theatre and movies. Sometimes an independent film and a small theatre experience are very similar though, because as an actor you have a different kind of ownership of it, compared to bigger movies and TV shows. The collaboration is similar as well, you’re all trying to create a piece of art that makes a specific statement. You’re all in it together. On a commercial television series or movie you’re all trying to make the same story too, but most of the time you have less control over the so-called moving parts. You just have to surrender ownership in a different way and that’s been a good learning curve, but it can be hard.”

Working on commercial TV shows or movies has its own challenges according to Jason. Such as learning how to find the right balance between preparation and last minute script changes on set. “It depends on the movie and the situation, but as an actor you have to protect your boundaries and let people know what you need, in order to do your job properly. Each actor has their own way of preparing for a role and getting ready to do a scene, but the industry moves so fast nowadays, sometimes there’s hardly time allocated for that. Occasionally you have to go on the fly, because there just isn’t enough time to prepare as much as you’d like. In television for example there are massive rewrites on the day of filming itself. That can result in actors cramming the lines into their heads and just being happy when they manage to get the sentences out coherently. But obviously that’s not what an actor sets out to do,” he says. “When I’m preparing for a role, especially on stage, I like to do a huge amount of research for my character and other aspects of the project. It’s one of the best things of being an actor, you get to learn tons of information about sometimes useless knowledge, which is only useful for a certain period of time. Or at cocktail parties,” he adds with a smile.

For his role as co-pilot in the movie Non-Stop, Jason also did a lot of research. But if it’s enough to fly an actual plane is of course another story… “Working on this movie has been a truly terrific experience,” Jason fondly remembers. “And that’s mainly because of director Jaume Collet-Serra, who did a great job with this ‘Agatha Christie who-dunnit at 40.000 feet’. You don’t know who did it, because the suspicion is on everyone. At one point there was talk about my character being one of the bad guys and I said to the director and writers: ‘I’ll happily play the bad guy if you want me to, but I’ve played that role quite a number of times. People who have seen me in other roles might suspect I’m the culprit. However, you tell whatever story you think is the best one.’ And I was happy the story turned out the way it did.”

Jason found the cast another positive aspect of working on this blockbuster. “I must compliment Amanda Mackey, the casting director,” he says. “There’s so much diversity on the plane, even more so than I guess you would find on an international flight from New York to London. A great group of actors. There’s Liam Neeson, Julianne Moore, the lovely Michelle Dockery, Lupita Nyong’o in her second movie, my friend Linus Roache, Corey Stoll…we all had a fantastic time on set and off, celebrating birthdays and going out for drinks together.”

“It’s always nice when you get to work on a movie, series or play with actors you’re friends with. The only thing is… when you know each other really well and you have to be romantically involved, that can be a challenge,” Jason admits. “ It’s hilarious at the same time though. But generally when you act with a close friend, you trust each other and it can make the acting that much richer. If there’s a heated moment, you can come up with something else and try it, because there’s mutual trust.”

“When I was considering a role in Non-Stop, I was reminded of filming The Taking of Pelham 1 2 3 in 2009. In that movie I also played a hostage victim and I practically spent three months on the floor of a subway car. I didn’t want to be stuck in the plane as a hostage on Non-Stop, having to work all days and basically having no screentime. But then I got the role of co-pilot Kyle Rice and I actually sort of regretted not being in the back of the plane with the other actors, because they had a lot of fun stories!” he laughs.

“But in general, the aspects I look at when considering a role, change every time. That’s one of the hardest challenges of a career actor. Trying to navigate what you’re artistically hungry for, at a certain moment,” he explains. “As an actor, you rarely get to make a decision that is a no-brainer. When Clint Eastwood calls you to play a major part in a movie, you know the answer is going to be yes. Or when someone asks you to play Hamlet in New York City, the answer is going to be yes. But it’s all the answers in between, that are going to be difficult. As a rule, I try my best not to repeat myself. Until I did Clint Eastwood’s movie Changeling with Angelina Jolie, I had never played a bad guy. I mostly played poetic, smart and articulate roles in the theatre. But after the role of the serial killer in Changeling, I suddenly got a lot of similar offers and I thought: I really don’t want to play that sort of part right now, because I just did it.”

“The factor I also take in consideration when considering a role, is the script. What do I get to do? Then of course there’s the director and the other actors I get to collaborate with and how fun or challenging that’s going to be. Another feature I look at, is the location. If a series or movie is being filmed in a new culture, I’m there! But if I have to move for a longer period of time to one of the most depressing cities of the country, I’m going to ask myself ‘should I really do this?’. Ideally I’d play in a theatre, movie or tv series in New York City or Los Angeles, so I get to live at home and see my family and friends. But often I have to go to places like Vancouver, New Orleans or Toronto as well, which are gorgeous cities.”

For the time being Jason resides in Los Angeles and has quite a few interesting things on his to-do list. “Right now I’m drawn to projects where I can play a normal character who’s struggling, but also has a sense of humour,” he says. “There are some plays I’m interested in, and a few actor friends and I are trying to figure out how we can do them. On top of that I’m doing some writing of my own. I write many of the roles with my friends in mind. I usually figure out later which role I can play. Then there are a few directors I would love to work with… I’d be willing take on a minor part, just to get a chance to work with them! Nicole Holofcener for example, I think she’s great. Gus van Sant is another one on my list. I met him once and afterwards I was like: it would be interesting to work with him one day! But first I’m working on a guest role in television series The Blacklist and I might be back in the next season of Homeland!”

“I do notice when I played in something more high profile like Homeland or Non-Stop, I see people getting that slightly confused look in their eyes when they walk past me. They think they recognize me, but they haven’t figured out from where. It’s funny. When I was in London around Christmas last year, a really friendly guy came up to me and asked me if I played in Homeland, which had just aired. He told me he liked my acting. I found the fact he recognised me surprising, because I was sporting a full beard and longer hair at that time, while I played a clean shaven federal guy in the series. But in general I don’t get recognised that often…”

A/N: That might change if he keeps up the good work! In the future we’re definitely going to see a lot more of this talented actor! For a complete list of Jason Butler Harner’s TV and movie work, check out the Internet Movie Database.