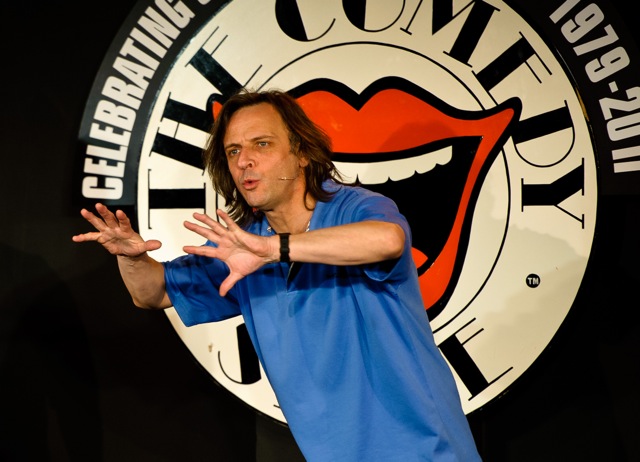 British comedian Richard Vranch is a comedy veteran. The 54 year-old has been doing improvised comedy for almost thirty years, among other creative projects, and still loves his work. It’s a job that involves taking chances to follow your passion, working anti-social hours, but most of all great teamwork and a lot of fun!

Richard Vranch performs on Wednesdays and Sundays at the renowned Comedy Store. “My colleagues and I started in the mid-eighties with improvised comedy at this comedy club in the centre of London,” he says. “It’s pretty much the same group of people doing the show over all these years. We’re actually in the Guinness Book of Records for being the world’s longest-running comedy show with the same cast. I think one of the reasons we’ve been together for so long, is the nature of what we do. Because we improvise, the show is different every time. If we would’ve performed in a play, which is almost the same every show, we would’ve gone mad in the first three months,” he quips. “Another reason is the fact that occassionally one or two of us are away for other projects. We then have guests that come on stage with us, which keeps it fresh as well. Each show is as new and exciting for us as it is for the audience.”

Many people would be horrified at the thought of having to be funny in front of an audience, without having prepared any material. “It’s actually liberating, once you’ve trained yourself to think that way,” Richard confides. “Also, I’m not on my own, I have my colleagues next to me on stage. We rely on each other to make a good show. Even the audience becomes part of the team because they give suggestions on which to improvise. We’re lucky that we don’t have to write out comedy material before a show, because writing comedy is a really difficult thing to do and get right. The fact that doing improvisational comedy is teamwork, makes it less nerve-wracking. However, I’m doing workshops on improvisation as well and that is much more intimidating! But improvisation helps people from all walks of life with the use of their imagination, not just actors. You teach people to look at things in a different way. We recently started The Improvisation Academy with workshops on improvisation for not just performers, but everyone who is interested in personal and professional development through improvisation.”

“I used to have a more regular job, after I graduated many years ago. But I wasn’t really enjoying it, that’s why I eventually made the risky decision to change from a reliable income to a totally unreliable thing. In this business you don’t make a lot of money in the first couple of years,” he admits. “I have a Ph.D. in Physics from Cambridge University and used to be a research fellow at St. John’s College at Oxford University. It’s totally different from what I’m doing now and yet it’s related. Because during the four years in Cambridge, my social life revolved around hanging out with students who liked to make comedy. Among them were Tony Slattery, with whom I used to do a double act, Stephen Fry and Emma Thompson. So in my spare time I had the chance to practice, learn and write comedy. It gave me a lot of experience, without any pressure. Looking back on those days, I could say my Ph.D. was as much about comedy as it was about physics! When I got a regular job, I saw my friends becoming professional comedians and actors and I thought, if I don’t follow that path, I’m going to regret it. So I left my job after nine months and luckily that decision turned out rather well for me.”

“One of my favourite contemporary comedians, who I’ve also worked with is Jim Sweeney, he’s the one everyone looks up to,” Richard says. “But when I was very little, watching television, I used to love the Marx Brothers. I liked that they performed as a group and the Comedy Store Players have that sort of group madness going on as well. Then there’s the comedy double act Peter Cook and Dudley Moore and of course Monty Python, who made a great team. In the eighties I was lucky enough to be on some of the stage shows and charity events and I got to see them perform their sketches. I was only a small part of the shows, doing some music for a few sketches, but to be on the stage alongside those people was amazing. Especially when you’re quite young and you’re invited along to be part of a much bigger dynasty, even for one night, that’s really exciting.”

“Nowadays the comedy scene in London is relatively competitive, because many people want to be a comedian, but there are fewer places in which to do it. After the big sort of explosion of comedy in the eighties and nineties in the United Kingdom, it’s now starting to contract slightly. There are less comedy clubs now than before. In 1979 The Comedy Store was the first platform for people who weren’t professional comedians or went to university, to try out comedy. It really changed the face of comedy. That’s what brought my colleagues and I together and gave me this dream job. In the early days it was Canadian Mike Myers and American Kit Hollerbach who taught us about improvisation and eventually left us to put our own stamp on it. More recently there came a point when there were too many clubs in London, causing the quality to go down. On top of that there was the crisis, which resulted in people having less money to spend on entertainment. That’s why the number of comedy clubs is slightly decreasing.”

“One of the best aspects of my career is the variety. I also perform on my own with stand-up comedy in French, where it’s just me talking to the audience with jokes I’ve written. There is a large population of French people in London. Now I’m not fluent in French, my vocabulary is limited,” he admits. “But that’s a good thing, because I have to be much more concise with the jokes, rather than rambling on and talking for ages. It’s fun. I’m also lucky because I get to do a bit of acting now and then, and travel the world! I’ve probably been in over 40 countries by now, doing sketches and improvised comedy in countries such as China, Mexico, the Middle East and India. It’s great because you get to make the audience laugh, but you also have more contact with the local population than most tourists. I love that. People often say that comedy doesn’t travel, but it’s surprising how many of the same ideas or jokes people across the world find funny. It’s a universal thing. People have much more in common than there are differences, which is a good message.”

“Of course there are a few downsides to my job as well. You work when other people, such as your family, have time off. When I’m doing a tour for example, I’m away in the weekends and work in the evening, when people go out for entertainment. So the hours are a bit anti-social,” he admits. “Secondly, there’s the fact that I’m self-employed. You could go out, not be funny and never work again in this business. Obviously, you try not to think of it that much, but it’s always possible. So the uncertainty is there, but I’m used to that by now. I don’t worry about it. A few years ago I used to get a bit frustrated when I saw someone on television for instance, doing something I wanted to do. You try to get your agent to get you on a certain show, write letters, go to parties for networking purposes. It was exhausting and it never worked. Some people are very good at it, but I’m not. Therefore I decided to stop trying, and the funny thing is, it hasn’t made any difference in the amount of work I get. I just take what comes along and I’m happy with that, really.”

If you want to see Richard and the other Comedy Store Players perform in London, please visit their official website for more information, dates and listings!