Canadian actress Carolyn Bridget Kennedy always had an interest in the creative entertainment industry. After a successful career as a paralegal, she decided to follow her passion and fully focus on a career both in front of the camera and behind it, as a writer, director and producer.

“I’ve been drawn to music and drama since high school, but I decided on a practical occupation,” says Carolyn. “I worked as a legal assistant in Manitoba for a while. Over the years I climbed the ladder and became a paralegal, specialising in personal injury litigation. I really enjoyed my work, especially because I was helping people with matters that had impacted their lives in such a negative way. However, as life went on, I found myself drawn back to the creative things I enjoyed doing in the past. I took a few courses in photography, painting and cooking, to see what I enjoyed doing the most. But even though I had fun with these activities, I couldn’t see myself doing them as a full-time occupation.”

Heartland, Fargo and The Bridget Linden Show
“In 2011 I participated in different acting classes, after a friend of mine encouraged me to look into acting, because he thought that would suit my talents and personality well. I absolutely loved it!”
Even though Carolyn was still working as a paralegal, she did some background acting in critically acclaimed television series such as Heartland and Fargo.

“I was just mesmerized by watching this team of people come together to make something creative happen,” she recalled. “During an acting workshop I was advised to work on the creation of my own web series. I did and this resulted in 125 episodes of The Bridget Linden Show, which I made at home with my own camera and laptop. It’s quite freeing to come up with ideas and a script, and not have to wait for permission for someone else to film it. It’s empowering and inspiring to be able to do that.”

Danger Pay
In 2014 Carolyn left the paralegal business and began to focus on her acting career. “I did full-time acting apprenticeships, but also writing-producing-directing courses with my acting coach, Neil Schell, to practice my skills and learn about the trade. During this time I created the web series Danger Pay.  My acting class friend Brent McIntosh plays the rather eccentric attorney Woodrow. I play Michelle Scott, who goes to work for him and as a result finds herself in rather weird, but often humorous situations. We had so much fun making the series and it was delightful to be able to create my own roles, projects and experiences. It’s also great to give other people the ability to contribute their skills to my projects and further develop them.”

Super Speed Dates
Carolyn has also written, produced, and acted in her first short comedy film Super Speed Dates. “As part of my acting apprenticeship, I wrote a short film script for the acting class with all of the other class members cast in some of the roles.  We filmed it in a single day in May 2016.  It is currently in submission to film festivals and, after those are finished, it will be released to my personal YouTube channel.  Until then, a teaser trailer is viewable at that site.  Super Speed Dates is about a group of women who attend a speed dating event and soon begin to wonder if the men have another side to them,” Carolyn added. “In addition to writing it and acting in it, I was also able to do some of the directing as well, as part of my training.”

Four different jobs
Even though it was acting that initially got Carolyn interested in this business, she particularly enjoys the creative side behind the scenes more and more. “My passion for the different jobs behind the camera grows as I gain more experience. In fact I have to keep a notebook next to my bed, because often I wake up in the middle of the night and have all these ideas for a story or a character in my head. I just have to write them down. My brain won’t shut off and the inspiration just keeps coming, I can’t turn it off,” she laughs.” So there are plenty of ideas to work with in the near future. One of them is turning Danger Pay into a television series. I also would love to work on another short film, as a director. On top of that there are two feature length films I want to produce and direct. That way I can translate my script to the screen, with the help of a group of talented people in the business. As a director you can orchestrate all the aspects of the project and really bring your vision to life.” 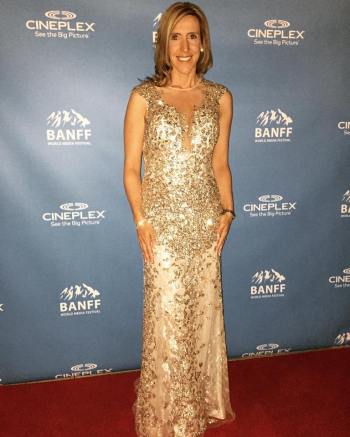 Spreading positivity
“All these different jobs – actor, writer, producer, director- it takes up a lot of time and energy, but it’s very much worth it. This is what I love to do and I look forward to making the best of every project I work on. There is so much negativity in the world, just look at the news… I want to focus my time and energy on something positive. I think it’s our duty to share our inner gifts with others and in the process inspire people to follow their own dreams.”

Jindua
Carolyn’s latest movie Jindua, starring three major Bollywood actors, comes out this year. She plays a Canadian immigration officer in this cross-cultural romantic comedy, for which half of the filming took place in India and the other half in Canada. “I was approached on Facebook by a local producer to play a role in this beautiful movie,” she explains. “I visit the main characters in their home, to establish if they are truly an authentic couple. I had a great time on set and I hope people will enjoy Jindua when it comes out later this year.”

One thought on “An Interview With Actress Carolyn Bridget Kennedy”